Characteristics of reading at the Within Word Pattern Stage

This is a transitional stage between the very emergent stage and intermediate stage.  These students are able to read with less effort than emergent readers, but they can easily be moved to a frustration level.

Students in this stage can read most single syllable words, and can often read two- and three- syllable words using context clues.

Students utilize word chunks in this stage; that is, they can look at an unfamiliar word and use chunks of the word, rather than decoding the word letter by letter.  For example, rather than looking at the word chest as ch-e-s-t, they could read it as ch-est.  This makes it faster for students to decode.

Students also learn a lot of sight words during this phase.  This increase in sight word knowledge and decoding rate leads to improved fluency and expression when reading.  These readers typically stop finger pointing and read more in phrases.  These readers often read at the oral rate of 100 words per minute.

Students in this stage begin to be able to sustain longer amounts of silent reading.

Characteristics of writing at the within word pattern stage

Students automatically know how to spell more words at this stage, making writing less laborious than at the emergent stage.
Writers at this stage put more effort into ideas and craft of writing, rather than the physical act of writing.

Students at this stage are able to spell SOME long vowel patterns and r-influenced vowels without error, but may be inconsistent and still mix these patterns up at times. 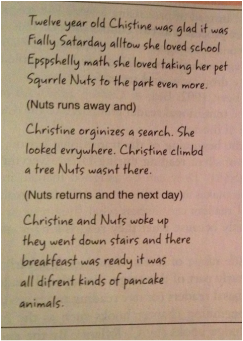