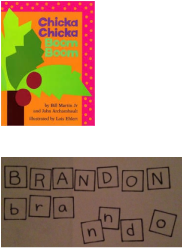 Alphabet Books
Read alphabet book such as:
Chicka Chicka Boom Boom
Dr. Suess's ABC
Arf! Beg! Catch! Dogs from A to Z.
While reading, help the child point out all of the items that are hidden in the illustrations, and notice the beginning sounds.


Name Puzzle
Write the child's name on letter tiles or cards.  Then have the student build the name underneath, matching each letter, using letter tiles, magnetic letters, foam letters, or even cereal letters!

Alphabet Cereal Sort
Use a box of alphabet cereal.  Give each child a handful.  Have students use a letter sorting board to sort the cereal.  Have children count the number of letters in each box when they are done. To extend, have children spell names or simple words with the cereal letters.

Font Sort
Allow children to learn to recognize a variety of letter styles.  This will draw attention to the letter forms.  Model the sort for children, then place materials out so that children can sort independently.  Keep the number of different letters to four or five, and keep about eight to twelve different styles of each letter out for sorting.